The startup Typewise is presenting the third generation of its virtual keyboard for smartphones. Typewise 3.0 uses a new patented autocorrect technology. 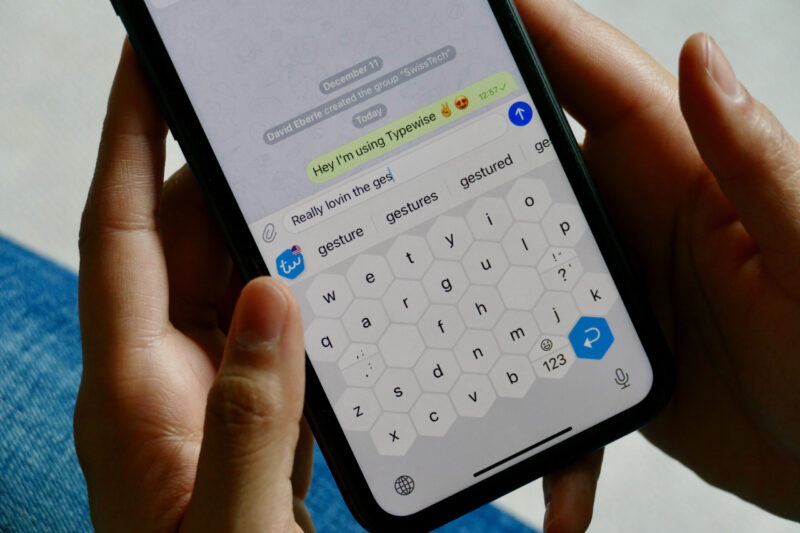 The tech startup Typewise from Binningen in the canton of Basel-Landschaft presented the third generation of its smartphone keyboard on Wednesday. According to a press release, Typewise 3.0 uses autocorrect technology that has been completely newly developed based on artificial intelligence. The press release states that the app for Android and iOS had been downloaded over a million times in the first year after its introduction. Moreover, Typewise recently won the CES 2021 Innovation Award.

Typewise was the first keyboard to be developed for typing with two thumbs on a smartphone. Traditional smartphone keyboards were developed for typing with ten fingers, which leads to typos according to the press release. Typewise 3.0 uses the new AI-based autocorrect. This produces a quarter of the number of typos. The app can process several languages and can even learn dialects. The press release goes on to say that Typewise 3.0 outperforms well-known apps such as Gboard and SwiftKey. A patent has been registered for the new software. Data protection is ensured as with the previous versions.

The sophisticated autocorrect abilities have been developed and improved along with the speech recognition and the total data protection, according to information provided by Typewise, with the support of the Swiss Federal Institute of Technology in Zurich (ETH).

Typewise Co-Founder and CEO David Eberle views the new version of Typewise as “a great achievement in terms of design, efficiency and precision,” according to the press release. The developers worked closely with the user community “in order to gain a good understanding of what various language users need across the world.” He adds: “Typewise started as a solution to make everyday life easier and to bring an end to irritating typos and awkward typing. Our mission is to change the way we input information into our devices.” Typewise is available for free in the Apple App Store and in the Google Play Store. Premium functions such as speech recognition are available for a fee.

Typewise will participate in the Mobile World Congress in Barcelona as a part of the Swiss National Startup Team from the end of June. This is the world’s largest and most important event for the mobile phone industry. The stay is organized by Venturelab. This is a continuation of Typewise’s success course, after having appeared in the television program “Dragon’s Den Switzerland” where it gained three investors, who took on 15 percent of the overall company shares for an investment of 300,000 Swiss francs according to the website watson. Additionally, Typewise has gained 1 million euros in a seed funding round according to an article on the website EU-Startups.